The Chinese Communist Party is waging information warfare to shape American public opinion and influence our economic and government policy to their benefit.

The CCP doesn’t shape public opinion by buying billboards and TV ads. That kind of persuasion is far too American for them.

Instead, they co-opt our leaders and buy entire companies.

China’s methods are more sophisticated and insidious than simply passing off envelopes stuffed with cash to American agents of influence. Often, the agents don’t even know they’ve been recruited.

The CCP manipulates the self-interest of its targets, making them unwitting recruits.

Rarely do you hear one of these influencers say, “That Communist Party of China sure is great—we ought to let it run the show! Everyone get on board!”

Instead, they’ll say something along the lines of “doing business with the CCP is good ol’ free market capitalism,” or “we need a peaceful and harmonious world,” or “this is what any reasonable person would advocate.”

But everything they say and do—or don’t say and don’t do—advances the aims of the CCP.

Some of these influencers have a vested interest in the status quo.

For decades, American businesses in China have been declining to speak up even when the CCP hacked their computers, stole blueprints, and produced knock-offs of their own products. Not only did they not file complaints against trade law violations, but they also went further and advocated continuing the same lopsided dysfunctional relationship that has empowered Beijing. They feared offending the regime that had absolute control over their business in China. They knew China could withhold or revoke permits, impose restrictions, and even confiscate their factories.

Wall Street financiers earn billions doing business with China’s Communist government. Beijing has given billions of dollars to Bridgewater Capital, a private equity fund run by Ray Dalio. Naturally, you will often see Dalio on TV telling us all how China’s Communist system is superior to our own.

Hank Paulson headed Goldman Sachs when he wasn’t U.S. Treasury Secretary. He and his fellow Wall Street bankers have been reliable partners in advancing the Chinese Communist Party line promoting globalism-über-alles. Wall Street is in it for the money and they either don’t realize or don’t care that they’re selling out the United States. Commerce has weakened their spirit of patriotism.

Wall Street has pushed hard to invest American pension and index funds in Chinese government-controlled companies. This not only shovels money to the dictators, but it also threatens to turn millions of ordinary Americans into Chinese agents of influence as they will be loath to stand up to the CCP lest their pensions and stock portfolios be endangered.

Beijing has directly paid McKinsey & Company management consultants, and McKinsey in turn tells its clients—including top companies and politicians—what a great and responsible business partner the CCP is.

Then there’s the import lobby. Everyone from Walmart and the Footwear and Apparel Association (really the footwear and apparel importers association) to the U.S. Chamber of Commerce and the Business Roundtable depend on cheap imports from China. They lobby against tariffs on China, which coincidentally, is exactly what the CCP wants them to do. Note that many newspapers depend on advertising revenue from these importers and the retailers who carry their goods.

When these vested interests say it’s in “the national interest” for us to continue down the current path with China, they mean it’s in their own business interest.

The Chinese Communist Party understands the corrupting influence of foreign business entanglements. Financial journalist and author Eamonn Fingleton explains how the Chinese empire threw itself open to foreign capital in the 19th century.

“The foreign investors formed alliances with the local elites, who in effect became lobbyists for the foreign capital. Foreign money quickly suffused government and largely disabled independent policymaking. Soon the local elites came to identify with the foreigners,” he writes.

The Chinese Communists learned from that history and now run the same play, only in reverse. They bought American elites and use them as their lobbyists in Washington. The elites have come to identify their interests with the CCP’s interests. American businesses became Beijing’s apologists and lobbyists.

The CCP uses this same tactic around the world.

Germany, France, and Great Britain also have global corporations eager to drink from the river of CCP money. The European Union and Germany have been largely silent as Beijing crushes Hong Kong. Diplomats in Brussels and Berlin took their cue from corporations that don’t want to disrupt business with Beijing.

Remember this the next time you hear “we can’t go it alone, we must work with our allies” to take on China.

The CCP is adept at peeling off allies. It exploits the weaknesses of its targets to enlist them in its cause.

Businessmen like money, so Beijing offers lucrative commercial opportunities. Politicians need money, so the CCP has campaign donors to work its will on our political leaders. Policymakers need to believe they are big thinkers and strategic masterminds, so the CCP cloaks its nationalist agenda in the language of “globalization,” “globalism,” and “a post-national future.” Reporters are susceptible to groupthink and conventional wisdom. They self-censor in their intellectual insecurity and suck up to their powerful sources on Wall Street and in Washington, so the CCP plays to these weaknesses.

The CCP corrupts everything and everyone it touches—in our culture, in our economy, and in our government. Since the beginning of the COVID-19 pandemic, minorities have disproportionately suffered from the virus’s health effects. A new study reveals that the government-mandated economic lockdowns have also hit minorities hardest.

In response to the outbreak and under the guidance of federal agencies such as the Centers for Disease Control, state and local governments imposed quarantine orders and mandated shutdowns for many businesses deemed “non-essential.” Whether one supports lockdowns as a public health measure or not, they undoubtedly resulted in tens of millions of Americans and counting filing for unemployment and a sharp economic downturn.

Like all government interventions into the economy, the unprecedented shutdown has not affected everyone equally. The government’s response to this crisis contained clear carve-outs and favoritism for politically connected large corporations, yet imposed disproportionate negative impacts on less politically influential minority-owned small businesses.

A new paper from Professor Robert Fairlie of the University of California, Santa Cruz exposes this reality for all to see.

“The number of active business owners in the United States plummeted by 3.3 million or 22 percent over the crucial two-month window from February to April 2020,” Fairlie found in his analysis of nationally representative government survey data. “The drop in business owners was the largest on record, and losses were felt across nearly all industries and even for incorporated businesses.”

This is a troubling economic observation in and of itself, yet the data are even more concerning when broken down along racial lines. 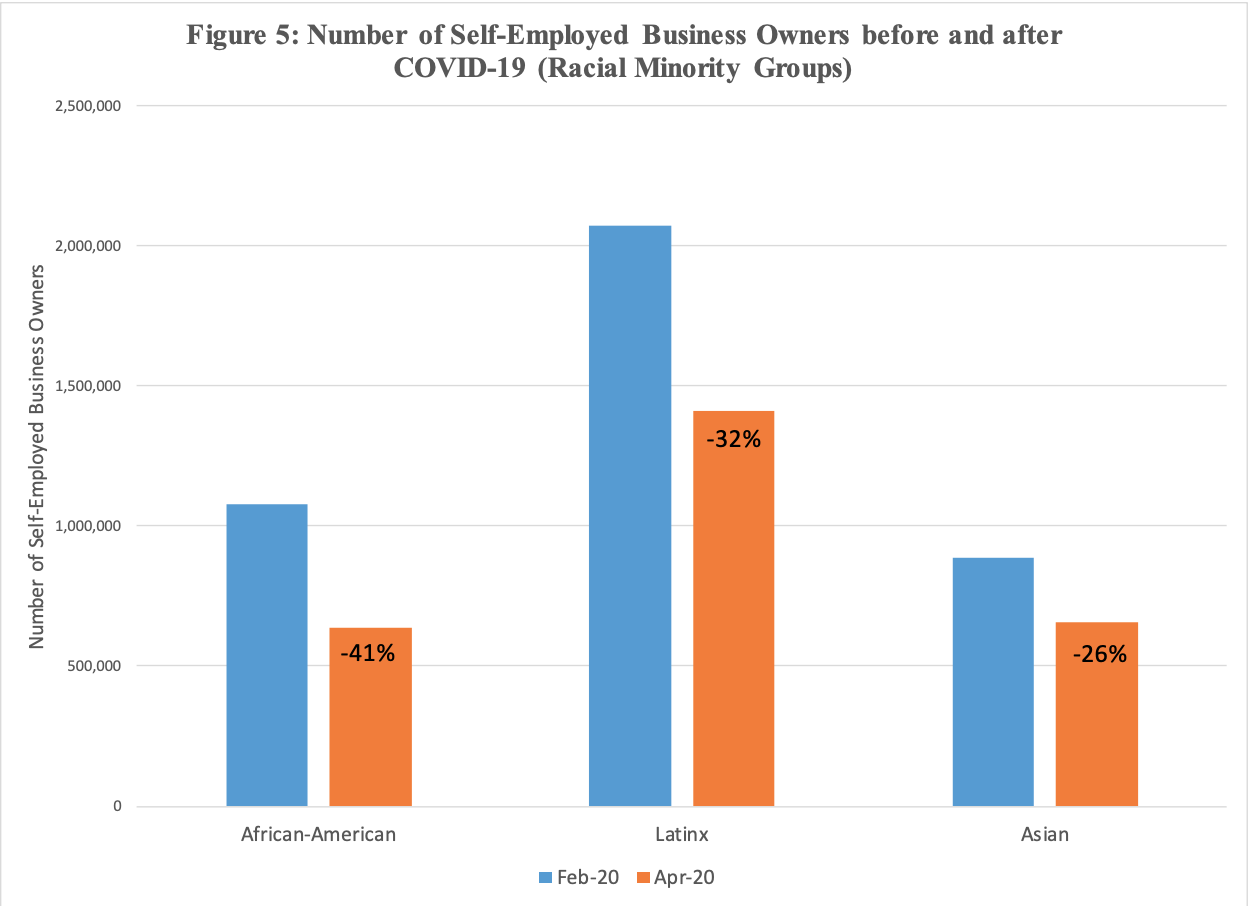 Remember that these abstract figures represent millions of actual people whose livelihoods were destroyed by the COVID-19 response. And as revealed in new reporting from the New York Times, the massive government programs passed as COVID-19 “relief” and “stimulus” efforts—we’re set to add a whopping $8 trillion in debt—are failing to help many of those who are most in need.

“Black-owned businesses also appear to be benefiting less from federal stimulus programs,” the paper reported. “Only 12 percent of black and Hispanic business owners polled between April 30 and May 12 received the funding they had requested.”

“It’s unfortunate that the businesses that need the funding, help and assistance the most are not receiving it,” the owner of a hair salon in the Bronx told the Times. “It’s like the Titanic. Where was the water coming up first? It was coming from the bottom. The people on the bottom were drowning first.”

Meanwhile, wealthy corporations are benefiting mightily from tax carve-outs in the congressional COVID-19 relief bill that was passed, the CARES Act.

Companies will receive more than $155 billion in benefits. This includes a whopping $862 million tax refund for the massive multinational corporation Boeing.

“The tax breaks were supposed to help ease companies’ red ink and keep paychecks flowing for workers,” Axios reports. “But most of the companies mentioned above, for example, have either furloughed employees or are pushing for buyouts.”

The lesson here is quite clear. When the government launches massive interventions into the economy and then passes 300+ page bills to “fix” the problem it helped create, political distortions will result in costs disproportionately borne by disadvantaged groups in society and benefits that skew toward the well-connected.

“I believe crony capitalism—the alliance between business and government—is the biggest problem of our age,” said economic historian Robert Higgs. “Crony capitalism, unfortunately, has a very active, organized, well-funded, and vocal constituency. It is the greatest threat to our prosperity and our freedom.”

“A free-market thwarts lobbying by taking the power that corporations seek away from government,” former Libertarian presidential candidate Mary J. Ruwart once said. “The only sure way to prevent the rich from buying unfair government influence is to stop allowing government to use physical force against peaceful people. Whenever government is allowed to favor one group over another, the rich will always win, since they can “buy” more favors, overtly or covertly, than the poor.”

The facts offered by this new paper and emerging COVID-19 data confirm theoretical predictions and offer a warning as to the unequal costs associated with mandating another lockdown if a “second wave” of COVID-19 emerges.

“Since bills keep piling up even when revenue isn’t coming in, many of these small [minority-owned] businesses face an uphill climb as it is,” the Wall Street Journal editorial board notes. “If they’re now getting back to work, and if they think they’ve taken the necessary precautions to do so safely, then the last thing they need is a politician ordering them to close shop for another month or two.”

Government lockdowns amid public health crises are ultimately a question of cost-benefit analysis. Whether one supports future pandemic lockdowns or not, we should all keep in mind that Americans do not bear the consequences of big government equally.

Brad Polumbo is a journalist and the Eugene S. Thorpe Writing Fellow at the Foundation for Economic Education, at whose website this article first appeared.