When I assess President Trump’s economic policy, I generally give the highest grade to his tax policy.

But as I pointed out in this interview from last year, there’s also been some progress on regulatory policy, even if only in that the avalanche of red tape we were getting under Bush and Obama has abated.

But perhaps I need to be even more positive about the Trump Administration.

For instance, I shared a graph last year that showed a dramatic improvement (i.e., a reduction) in the pace of regulations under Trump. 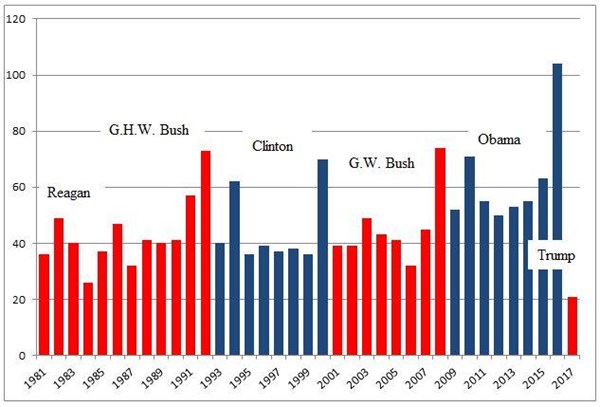 For all intents and purposes, this means the private sector has had more “breathing room” to prosper. Which means more opportunity for jobs, growth, investment, and entrepreneurship.

To what extent can we quantify the benefits?

Writing for the Washington Post, Trump’s former regulatory czar said the administration has lowered the cost of red tape, which is a big change from what happened during the Obama years.

Over the past two years, federal agencies have reduced regulatory costs by $23 billion and eliminated hundreds of burdensome regulations, creating opportunities for economic growth and development. This represents a fundamental change in the direction of the administrative state, which, with few exceptions, has remained unchecked for decades. The Obama administration imposed more than $245 billion in regulatory costs on American businesses and families during its first two years.

The benefits of deregulation are felt far and wide, from lower consumer prices to more jobs and, in the long run, improvements to quality of life from access to innovative products and services. …When reviewing regulations, we start with a simple question: What is the problem this regulation is trying to fix? Unless otherwise required by law, we move forward only when we can identify a serious problem or market failure that would be best addressed by federal regulation. These bipartisan principles were articulated by President Ronald Reagan and reaffirmed by President Bill Clinton, who recognized that “the private sector and private markets are the best engine for economic growth.”

But how does this translate into benefits for the American people?

Let’s look at some new research from the Council of Economic Advisers, which estimates the added growth and the impact of that growth on household income.

Before 2017, the regulatory norm was the perennial addition of new regulations. Between 2001 and 2016, the Federal government added an average of 53 economically significant regulations each year. During the Trump Administration, the average has been only 4… Even if no old regulations were removed, freezing costly regulation would allow real incomes to grow more than they did in the past, when regulations were perennially added… The amount of extra income from a regulatory freeze depends on (1) the length of time that the freeze lasts and (2) the average annual cost of the new regulations that would have been added along the previous growth path.

…In other words, by the fifth year of a regulatory freeze, real incomes would be 0.8 percent (about $1,200 per household in the fifth year) above the previous growth path. …As shown by the red line in figure 3, removing costly regulations allows for even more growth than freezing them. As explained above, the effect, relative to a regulatory freeze, of removing 20 costly Federal regulations has been to increase real incomes by 1.3 percent. In total, this is 2.1 percent more income—about $3,100 per household per year—relative to the previous growth path.

Here’s the chart showing the benefits of both less regulation and deregulation. 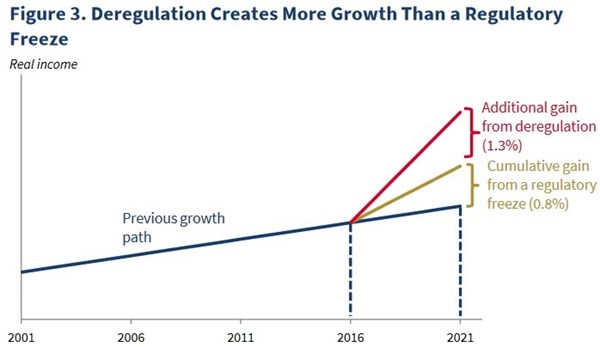 The chart makes the change in growth seem dramatic, but the underlying assumptions aren’t overly aggressive.

What you’re seeing echoes my oft-made point that even modest improvements in growth lead to meaningful income gains over time.

Daniel J. Mitchell is a Washington-based economist who specializes in fiscal policy. This article appeared at fee.org. The Economics Professor Who Discovered the Only Natural Resource That Matte...
Scroll to top
Write for CFI